This season I have partnered with TiqIQ to bring you ‘81 days in 203’, a series of articles breaking down the life of a super fan. ’81 days in 203’ articles will be featured on various Yankees blogs within the TiqiQ network of blogs and will be posted throughout the 2013 season. Remember, for the best deals on not only New York Yankees tickets, but all MLB tickets, visit TiqIQ.com.


Tuesday night saw the return of Inter-League action to the Bronx as the Arizona Diamondbacks (or are they they D-Backs now?) came in for a three game set. Obviously, these two teams have some memorable post season history, being the dramatic 2001 World Series (which, even in loss, is still my favorite World Series to be a part of). While the mood around the stadium Tuesday was FAR from post season like, there was another ominous coincidence, being that the two teams are meeting once again after a breach in National Security.

There was a noticeable increase in police presence, both uniformed and undercover. There was no shortage of armored vehicles and officers with tactical gear. Having experienced the old stadium immediately post 9/11, it certainly brought back some unpleasant memories. Obviously, it's a necessary precaution, and as fans we have to deal with some of the extra inconveniences (like officers making fans throw out sealed bottles of water, which have previously been allowed in the stadium). Aside from being a little parched after Roll Call, it wasn't much of an issue.

Of course, there were a few customary tributes to the city of Boston, including this shot of the marquee between gates 4 & 6. 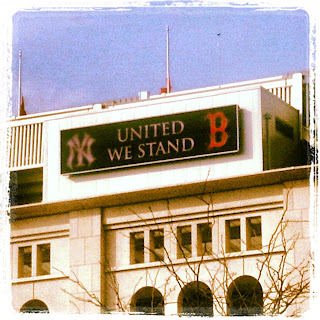 Along with a Moment of Silence for the victims of the Boston Marathon tragedy, The Yankees played Sweet Caroline (a Fenway Park tradition) at the end of the third. Without a doubt, it was the most support for anything Boston related to ever happen at 161st and River.

The NY/Boston rivalry had gone on for decades, but for at least one night, it was suspended on The Ave. All of the outside vendors (myself included) removed our "anti" Boston apparel from tables and shelves and everyone was much more tolerant of of the random Sox hat in the crowd. It was certainly something we are not completely used to. For years, the bulk of my shirt sales were due to popular rivalry apparel.

Personally, I've noticed quite a decline in the "heat" the rivalry has drawn over the last several years (not so much after 2004, but certainly after the Sox second win in 2007). For Yankee fans, the joy of the rivalry came in the fact that we most often came out on top. Once we lost some important games to the Red Sox (and some of the key players that were apart of those teams have departed) the more hard-core fan became less obsessed with the rivalry. It still held value in ticket sales (as well as merchandise sales) for a few years because it takes a while for things to trickle down to your casual fan, but I think it may have finally run its course (and the events of recent days are the proverbial nail in the coffin).

To be hones with you, I'm not all that upset to see it go. Sure, I've sold quite a few shirts regarding the rivalry, but agree that it's time to move on.  As far as my brand/business is concerned, I'm focusing on creating apparel that supports OUR team instead of makes fun of another team (shocking, I know!). It's going to take a bit of getting used to, and I might see a little slump in sales, but I think it's the right thing to do. Not just because of what happened Monday in Boston, but I think it's important for my development of the Bleacher Creature brand.

After all, we are Hardcore Yankee fans in the Bleachers, and we have plenty of guys on our own team who could use our vocal support.

As always, if you want to join us out in Section 203 to lend some of your vocal support, check out our friends at TiqIq.com for the best deals on Yankee Tickets.
Posted by Bald Vinny at 9:36 AM