This season I have partnered with TiqIQ to bring you ‘81 days in 203’, a series of articles breaking down the life of a super fan. ’81 days in 203’ articles will be featured on various Yankees blogs within the TiqiQ network of blogs and will be posted throughout the 2013 season. Remember, for the best deals on not only New York Yankees tickets, but all MLB tickets, visit TiqIQ.com.

The first homestand for 2013 is in the books, and it feels like quite a relief (though, admittedly, I do wish it was a bit longer than three games). After the exhilaration of Opening Day (and the requisite day off) Game Two could be summed up in one word: Cold

It was seriously one of the coldest games I had ever been to. The temps were low, the winds were whipping, and the play on the field made it even harder to sit through. Aside from a brief respite in the early innings (shout out to Zak at Steiner Sports for the Luxury Box invite) I stayed for the entire game in Section 203.

For those of you that know me, it's not uncommon for me to bounce out of the game an inning early to head to my t-shirt stand. Business comes first for me in the Bronx, and if the crowd is heading for the gates or my assistance is needed, I will sometimes split early. I really had nothing to do outside on Wednesday, so I stuck it out with a few of my Creature brothers and sisters until the final out (there were 6 of us left in the bottom of the 9th). Not sure what I was hoping to see, but when I finally thawed out, I swore that I still had a good time. 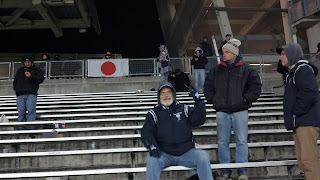 Game three was immensely better, if not simply for the weather, but for the Yankee win. I know it's still very early in a long season, but with the way people talk about this team coupled with the first two games, we even found ourselves getting excited about simply having a lead (yeah, sometimes confidence can feel that low). Yanks hung on to win it, and the mood on the avenue felt good after the game for a change.

I hate to sound like a sap, but I do get a little sad when the Yanks hit the road. I really enjoy being on the ave and interacting with so many passionate and knowledgeable Yankee fans. It makes even the longest, coldest, losing-est game a bit more bearable (and this week, every little bit of that helped!). Yanks return next Friday, and I'm already looking forward to the first Friday night game in Section 203 (If you've never been, it's an entertainment spectacle unto itself).

Hopefully next week will show the return to more seasonable, baseball like weather. If you get the chance to join us out in 203, it's sure to be a good time. As always, if you need the heads up on tickets, make sure you check out our friends at TiqIq