Matt Fortese/Stand For the Silent

Not gonna lie to you guys.

I've been putting off the writing of this blog for the better part of a month now. I've constantly made excuses for myself and just plain ignored it at times, but I've finally carved time in my evening to sit down and get this epic blog out of my system.

As I mentioned, this all started about a month ago. I woke up one morning to a Tweet linking me to a news story out of Baltimore. It was about a Yankee fan, Matt Fortese, who had gone to an Orioles/Nationals game with his girlfriend. Like most Yankee fans, Matt wore his team colors in enemy territory. However, Matt paid a terrible price for doing so.

The article described how Matt and his girlfriend were taunted all game by two (presumably drunk) Baltimore fans. It escalated to the point of an altercation, which found Matt on the wrong side of angry punch. He went head over heels over a railing, cracking his skull rendering him unconscious. Additional reports include the two men spitting on Matt as he lay motionless on the floor.

The story immediately hit me hard. How many times have I been in almost that exact situation? Like most of you, I rep my Yankees gear home and away, in season or not. I have been to NUMEROUS ballparks where the taunting has gone just a bit too far and I have seen way too many fights over the game of baseball. Granted, these were in my more youthful days, but it seems that little has changed over the years.

So, I sat on this story for a few weeks. I didn't quite know what to say. I mean, was comment really necessary? Could anyone NOT see the absolutely abhorrent behavior of those two fans?  What was I goint to add to the story? I wasn't going to get on a moral soapbox. Lord knows I've done more than my fair share of taunting and teasing. It wasn't until just this past week, when I met Kirk Smalley during a HOPE Week event, that I knew how to bring it all together.

Kirk is the dad of an 11 year old boy, Ty. Ty was, by all accounts, a good kid that was fun to be around. Except for some reason, he was the subject of bullying at school. The bullying got so intense over a two year period that finally, one day, Ty fought back. As Kirk told the audience, "it's always the second guy who gets caught", and Ty was the one caught fighting. He got the punishment, and was sent home to a suspension. It was during this suspension, home and alone, that Ty took his own life.

Kirk's message was emotional, to say the least. As a parent, some of the stories he was telling of other children who had been bullied was just heart wrenching. He told of a six year old girl who was so afraid to go to school for fear of a bully that not only did she tell her mother that she wanted to take her own life, she had a plan in her mind on how to do so. SIX years old....

My daughter is five.

Needless to say, I was moved.

Kirk, and his group Stand For The Silent, travel all around the world hosting assemblies for hundreds of schoolchildren to educate them about the terrible, real-life consequences of bullying. As I stood in The Great Hall, looking at the faces of not only kids, but many adults, fighting back tears, I somehow thought of Matt Fortese.

In a very real way, Matt was the subject of bullying in the same way Kirk's son Ty was. Instead of daily torment at school over a two year span, this happened in less time than it takes to play a baseball game. A lot of things became very clear to me at that moment, and I hope it's doing the same for you right about now.

We've all been a part of some intense baseball rivalries, and nothing that I say here is going to influence you one way or another the next time Boston comes to town. But I really do encourage you to check out Kirk's message and perhaps he'll change your perspective a little bit, just as he's changed mine.

When I first heard Matt's story, I reached out to a few of his friends in Baltimore to see how I could help. I never met the kid, probably never will, but just felt the need to stand behind another Yankee fan during a difficult time. The guy was in bad shape, he'd spent a few weeks in a hospital, but thankfully is now home beginning the long recovery process.

His family is left with a ton of hospital bills, so to help raise some money, I'm hosting a few eBay auctions that I hope you'll take a look at (and bid excessively on!)

First up is my token donation for any fundraiser: An evening for two in Section 203 of the Right Field Bleachers at Yankee Stadium. Winner will hang out with me during Roll Call and each guest will get their choice of shirt from Bald Vinny's House of tees. To make this one even better, our good friends at the Hard Rock Cafe at Yankee Stadium have donated a gift voucher for dinner and non alcoholic drinks for two (for up to $150).

The next item has been donated by my good friend "Yankee Vic" and comes from his extensive personal collection. It is a very rare 2000 Subway Series/World Series commemorative envelope signed by Mariano Rivera (included is a Steiner Certificate of Authenticity). The envelope is in pristine condition AND is stamped by the Subway Series Station in the Bronx Dated October 21, 2000. 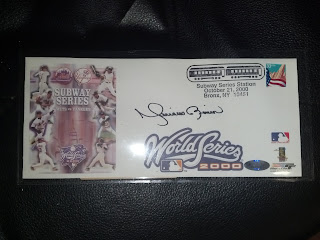 Next up is a Tino Martinez signed baseball, courtesy of my good friend and right hand man, George Brew. Also culled from his personal collection, this Tino autograph is housed in a great display case ready for any collection. 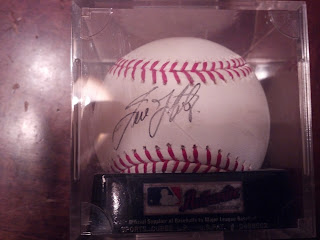 Finally, the big one. The show stopper. Pretty much the coolest thing I ever laid eyes on, is a hand painted original Mariano Rivera painting by Internationally known artist Craig Mahoney. If you don't know Craig's talent, you are missing out (and can catch up here). Craig gained recent fame for his "Grown Up Calvin And Hobbes" and his art/comedy can be found all over New Jersey. Craig was awesome enough to donate this 36"x24" acrylic on canvas masterpiece (additional "in progress" photos can be seen in the listing) 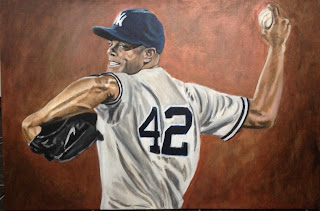 You can see any of the auctions here, or by clicking the links above.

Thanks, and be kind to each other :-)