An Important Date in Bleacher History


I usually don't write a blog before any home games have taken place, but I'll make an exception this week in order to give you a brief history lesson (trust me, this one is important).

On this date in 1996, prior to the game, a special service was held in Section 39 of the Right Field Bleachers at the old Yankee Stadium. It was a somber night, as one of the leaders of the group that sat out there had passed away just a week earlier. His name was Ali Ramirez, and without him, I wouldn't be writing these words to you today.

Ali is credited within our group as being the "original" Bleacher Creature, as his presence pre-dated all of the Bleacher Regulars (that was what the group was called before we were dubbed The Creatures). Ali attended his first game in the Bleachers in 1959 and was proud to call Section 39 home for the better part of 37(!) years. He is most known for bringing a cow-bell to the section to help rally the fans and cheer on the Yankees (a tradition we are proud to carry on to this very day). It was the rhythm of the bell and the raucous cheering from the crowd that attracted fans from all over the ball park into the bleachers.


For several years in Section 39, there was a brass plaque dedicated to Ali that adorned the seat he called home. We were touched and honored when the Yankee Organization moved the plaque to our new house, cementing the tradition that Ali's seat always remained "reserved". 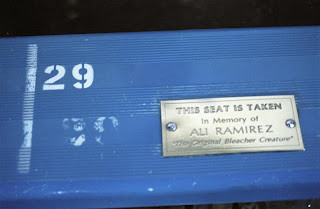 Prior to the "dynasty" run of the late 1990's, the bleachers were General Admission, meaning you could buy a ticket and sit anywhere you wanted. Except on this night in 1996, the confines of Section 39 were off limits unless you were a family member or part of the Section 39 crew. It was blocked off by Yankee Security as well as many Bleacher Creatures. The flags at the stadium flew at half-staff, and there was a banner hanging in the back of Section 39 dedicated to Ramirez.

A small private ceremony was held pre-game, and as the sun set and night descended on the Bronx, a lone star twinkled in the sky. As the innings ticked away, the impending feeling of "Yankee Magic" filled the stands and concourses of The Stadium. For, it was this night, that Doc Gooden would toss a no-hitter and etch his own name into the Yankee history books.

Tonight, some 17 years later, the Yankees will once again be facing off against the Seattle Mariners (the team against whom Gooden tossed his no-no) but this time within the confines of the new Stadium. Lots of things have changed since that date in 1996 (new stadium, new players, new fans and new staff), but one thing will always remain: the everlasting memory of the man who started it all for us so many years ago.

Rest In Peace, Brother Ali. Keep ringing that bell up there in Heaven and cheering on our Yanks.