You never know when opportunity arises, so it's always best to be prepared.

As I'm sure most of you know I operate a small t-shirt company with a retail location outside of Billy's Sports Bar on River Ave across from the old stadium. On Thursday and Friday of this week, our good friend Michael Kay was broadcasting his show from the newly renovated VIP area inside Billy's.

His guest for Friday's show was long time friend of The Creatures (and pretty much one of my most favorite people of all time) David Cone. Once we finished setting up my shirt stand, I went to park my van, and flipped on ESPN Radio to check out Coney's interview.

After a few minutes of banter, Cone commented on how enormous the inside of Billy's is, claiming that they could have a whiffle ball game right there by the bar. Cone's request went something like this:

"If you are at the stadium and could bring a whiffle ball and bat to Billy's Sports Bar RIGHT NOW, I want to face off against Don (LaGreca, Michael's co-host on the show)"

Now, I'm not sure how many people were listening, or were by the stadium, OR had a wiffle ball and bat to lend.....but I did!

I practically live out of my van in the summer, and it just so happened that I had a bat and ball buried under boxes of tees (the bat was easy to find, the ball a little tougher).

I hustled down to the bar, passed off the items, and had a front row view as Coney warmed up to face Don (sorry the pictures kinda suck): 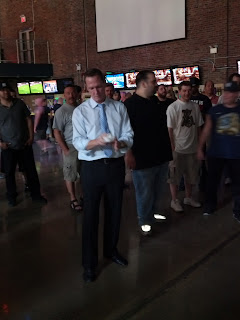 I tried to get some video of the actual at-bat, but it came out pretty crappy so I'll spare you guys. But it was a ton of fun. And, in the end, I scored one of the most unique autographs to add to my collection: