Tell 'Em Why You Mad, Son

I cant stop thinking about this shirt that I spotted at Modell’s this past weekend. And the more I ruminate, the angrier I get. 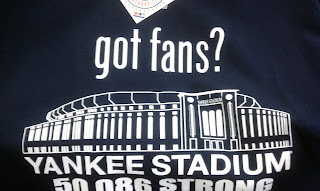 Exactly. It’s a lame (licensed) Yankees shirt. Which means someone (most likely Majestic) not only paid a designer to re-hash a lame idea for the umpteenth time, but they paid for the licensing as well.

Do I really need to get into the lameness of this? The “Got Milk?” concept was funny 10 years ago. In Yankee land, it should have ended with the “Got Melky?” phenomenon (I wonder who the first vendor on River Ave was that had those…..oh yeah. It was me). The phrase really jumped the shark with the “Got Rings?” interpretation. But no, Majestic had to go to the well one more time for this striking piece of apparel.

(For full disclosure, I used the idea again for the "Got Stache?" shirt, and that was THREE YEARS ago. The idea is old and past it's prime. Time to move on)

Not to mention that the new Yankee Stadium has drawn 50,086 fans to a game maybe five or six (being generous) times? Shirt should read "Got 25,000 Corporate Fans in the High Priced Box Seats Playing with IPhones and Eating Lobster Rolls?"

So, why am I so mad? I’m mad because I can GUARANTEE that a licensed Bald Vinny/Bleacher Creature shirt could outsell this garbage. I would risk everything on that bet. Hell, I would bet that marketing to my Twitter following ALONE would generate enough sales to beat this shirt.

Yet, I find myself in the position I am in, about to close my doors after 10+ years designing ORIGINAL and CREATIVE apparel for Yankees fans.

Why am I so confident? Well, for starters, I post a pic to a lame shirt and get over THREE THOUSAND views in 2 days. I’m sure you are all tired of hearing me toot my horn since my last blog…but come on! Do I really need to spell this stuff out?

Yankee fans, I know you all trust me to represent you in the apparel I create FOR YOU (the fans). I would never call for a boycott or anything harsh like that, but I hope those of you that I cater to would never buy such crap like this.